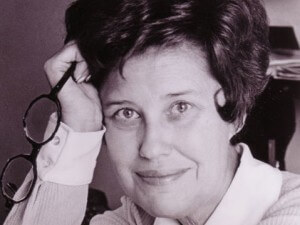 Recently, I wrote a blog post titled “Though Dead, Yet They Speak” marking the twentieth anniversary of the deaths of the Monks of Tibhirine and Henri Nouwen. But there is another person who also had a profound impact on my life like those gentlemen. And through her humor and writing, she spread good news to other women. I forgot about this lady who died twenty years ago yesterday…..in my hometown of San Francisco. And even today, though dead, she still speaks.

The nineties were a blur; from 1990-1999, I had six children. I was actually living the life Erma had been writing about for decades. Nineteen ninety-six was one of the few years of that decade I didn’t have a child. I had one at the end of 1995 and would have another in the summer of 1997. I had two in the eighties and two more in the first decade of the 21st Century. A total of ten. I would’ve engraved and framed the words Erma would have crafted regarding my chosen lot in life. And yet, that is just what she did throughout her career, craft words and stories that highlighted the life of the American woman, the American mother in particular, and all her cares and responsibilities. Women, who felt invisible doing all that needed to be done to maintain their homes, could turn to Erma and laugh as if they were sitting at their kitchen table with a good friend. That good news produced laughter, encouragement and perseverance. Definitely good news for the weary woman.

Perhaps I couldn’t have grouped her with the monks and Brother Nouwen anyway because their content and their lives were definitely different than Erma’s. So it seems. The monks by their lives’ and Henri by his writings changed my life spiritually. But Erma packed a spiritual punch in many of her writings as well, and it behooves us to remember and admire how she wove great truths into her writings.

Of course, we all remember her essay “When God Created Mothers”.  She loosely translates the Genesis record and she nails it on the head as she describes the mystery of motherhood and its incalculable worth. She wraps up the essay with the sublime:

Finally the angel bent over and rang her finger across the cheek.

“There’s a leak,” she pronounced, “I told You that You were trying to put too much into this model.”

“You are a genius,” said the angel.

Somberly, God said, “I didn’t put it there.”

Her words were not just for the mother, “the one who was overkidsed, underpatienced, with four years of college and chapped hands all year around,” but for any woman. Many of her writings were for women in general, and for older women in particular. And for the woman who looked in the mirror and thought it was too late for her, she wrote these gospel-like words:

For years, you’ve watched everyone else do it….And you envied them and said, “Maybe next year I’ll go back to school.” And the years went by and this morning you looked into the mirror and said, “You blew it. You’re too old to pick it up and start a new career.” This column is for you.

Margaret Mitchell won her first Pulitzer Prize for Gone With the Wind in 1937. She was thirty-seven years old at the time.Sen. Margaret Chase Smith was elected to the Senate for the first time in 1948 at the age of fifty-one.Ruth Gordon picked up her first Oscar in 1968 for Rosemary’s Baby. She was seventy-two years old.Billie Jean King took the battle of women’s worth to a tennis court in Houston’s Astrodome to outplay Bobby Riggs. She was thirty-one years of age.

Grandma Moses began a painting career at the age of seventy-six.

Anne Morrow Lindbergh followed in the shadow of her husband until she began to question the meaning of her own existence. She published her thoughts in A Gift from the Sea in 1955, in her forty-ninth year.Shirley Temple Black was named Ambassador to Ghana at the age of forty-seven.Golda Meir was elected Prime Minister of Israel. She had just passed her seventy-first birthday.

Or you can be like the woman I knew who sat at her kitchen window year after year and watched everyone else do it. Then one day she said, “I do not feel fulfilled cleaning chrome faucets with a toothbrush. It’s my turn.”

I was thirty-seven years old at the time.

She preached that we can have a second act, or a third act; shoot, some of us can have sequels.

In 2007, more than ten years after she died, the year my first column was printed, I was forty-eight years old at the time. Act II.