It’s one of my favorite Beach Boys songs. Like “In My Room”, it’s haunting melodies underscore the quintessential feeling and mood one feels while drinking in the congenial rays of a friendly sun. As autumn dawns, the warmth of the sun, when it does shine on the Northern California coast, especially in Indian Summer, is a truly invigorating, kind and soothing phenomenon. Unlike the brutal summer sun, as welcoming as it is after a cruel winter, it becomes unyielding and unbearable when it beats down into triple digits.

Today is the beginning of fall. Like my fellow fall-a-philes, we look forward to the shorter days which are bordered by crispy cold mornings and brisk evenings while filled with a warmth of the sun that beguiles the season. Autumn is “the season between summer and winter comprising in the northern hemisphere usually the months of September, October, and November or as reckoned astronomically extending from the September equinox to the December solstice,” or as we “poets” muse,  “a period of maturity or incipient decline”. While the days shorten, the year faces its end and the leaves fall and die; this season, and the warmth of its days, for some reason invigorates the soul and all its creative impulses.

The colors associated with this season construe earth, nature, home, if you will, at least to me. Browns beckon us to the dust from which we were formed. Burnt yellows and oranges warm our hearts like a small fire. Deep forest evergreens envy their deciduous cousins whose deaths make such a spectacular display.

It’s been a tough couple years, years fraught with demanding work, family discord, parental decline, loved ones’ depression and, sadly, death.  So much so I haven’t been able to appreciate the little rays of warmth that have shone through the storm clouds. But as I get older, I am learning to appreciate those very rays, those rays which are, indeed like photosynthesis, life giving.

My office is away from the main hub of activity where I work. I have to walk over to that office a couple times a day. Despite the cool summer we had on the Peninsula, many mornings the sun would shine in such a gentle fashion that I’d just look up and let the warmth of the sun wash over me.  Like the plant converts the sun’s energy into life, so the rays from the sun convert my sadness into joy,  my darkness into light and my pandemonium into peace. It’s amazing that this free resource of peace surround us daily.

I took a little trip up north for just a day. I needed to get away and stop – just stop – no activities but sitting on the pier, lounging in the river and soaking up the trees, the birds, the smells of days gone by and, of course, the gentle end-of-summer sun. I told my niece I was enjoying the ministry of nature. The difficulty of the past few years reminds me of a story from Mrs. Cowman’s devotional, Springs in the Valley.

In the deep jungles of Africa, a traveler was making a long trek. Coolies had been engaged from a tribe to carry the loads. The first day they marched rapidly and went far. The traveler had high hopes of a speedy journey. But the second morning these jungle tribesmen refused to move. For some strange reason they just sat and rested. On inquiry as to the reason for this strange behavior, the traveler was informed that they had gone too fast the first day, and that they were now waiting for their souls to catch up with their bodies.

This whirling rushing life which so many of us live does for us what that first march did for those poor jungle tribesmen. The difference: THEY KNEW what they needed to restore life’s balance; too often, WE DO NOT.   –July 11

One of the reasons why I like photography is that I can capture some of these free resources that surround me whether it is a spectacular Pacifica sunset, a cool morning by some “still waters”, a plucky stellar jay, Erin’s sunflowers or the last blackberries of the summer, to name a few. All these little things, like the warmth of the sun and the colors of autumn, help me sustain my life and perspective in a big way, and allow my soul to catch up with my body. 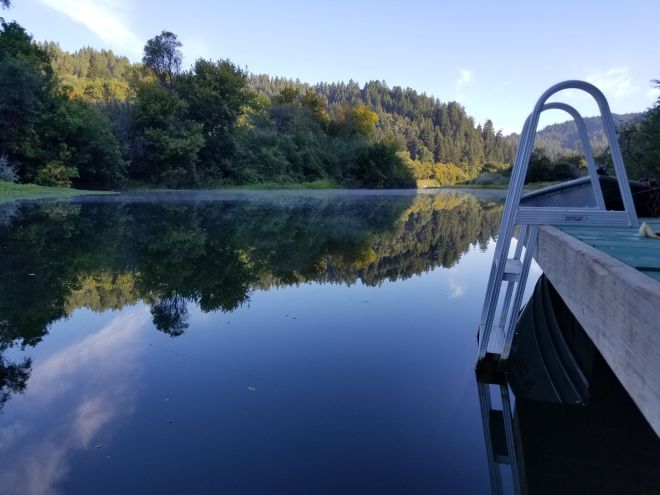