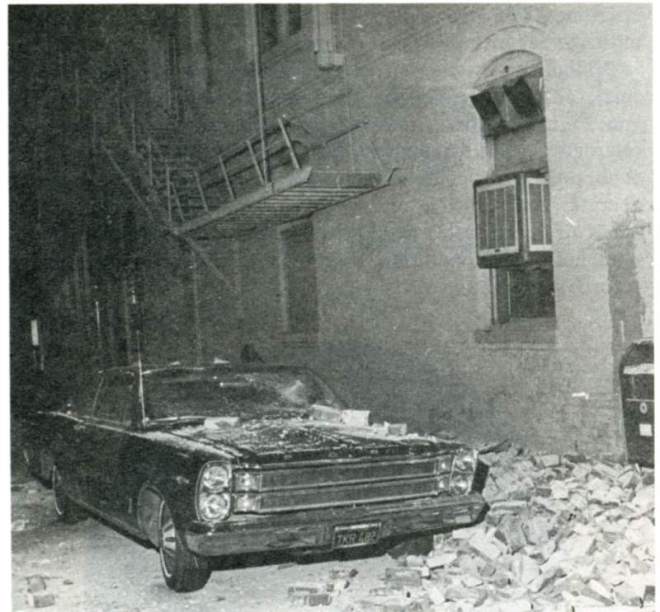 A couple nights ago, the East Bay was rocked by a nice size earthquake. Long enough to fear that it could be “the big one”. Strong enough to remind me of the many earthquakes I’ve been through.

I was born in San Francisco back in the late ’50’s. You’d think I would’ve become accustomed to this Bay Area phenomenon. Nah…I still don’t like ’em. I still have memories of the many I’ve experienced.

Fifty years ago this month in Santa Rosa, a pair of earthquakes seered into my childhood memory, into my being. And to this day…yes, even now…I often get chills around 10:00 PM…remembering that night. Thirty years ago, today, I remember the Loma Prieta quake, but it didn’t have the same effect on me as the quakes of 1969. Across the decades, I have a spattering of memories from the little quakes that have peppered the area.

In 1969, I was a ten year old tomboy sleeping in my top bunk bed. I was transitioning from consciousness to that wonderful place of slumber when the house violently shook like some giant grabbed it and shook it like an Etch-A-Sketch, and then put it right down. I remember being terrified, I remember my father running down the hallway, I remember hearing swearing, no doubt when my dad stepped on a tack from the fallen bulletin board. The only physical injury sustained in the Moore home.

“What was that?” I screamed. “An Earthquake!” someone replied. That earthquake and the two that followed were the most fearful things I’d ever experienced. Afterwards, most of the neighbors gathered in the middle of the street…very unlike our 4th of July celebrations when we would close off the entire street and celebrate. We all stood around in our nightgowns and pajamas…parents wondering what to do next.

By the time we had settled back into bed, around 11:15…bam came the second quake. That’s it, I’m sleeping with my parents. I don’t know when I feel asleep…but eventually did. I woke up when my dad did sometime after 5, just in time for a powerful aftershock. I’ll never forget that day…the absolute fear and helplessness of being confronted with a natural event so powerful.

Loma Prieta….luckily for me, I had just hopped into my nice little Honda to drive to the Mission District. Turned the key just at 5:04 PM….why was everyone running into the street? My little boy sat near my friend’s front yard palm tree with his sister while my sister, friend and their kids rushed to the street. Then I felt the tail end of the biggest quake to hit the Bay Area since ’06.

“Oh…it’s ok, it’s just a little earthquake.”  as I got out of the car. I assured everyone in my smart alecky way. The looks I got spoke otherwise.

“Oh no it wasn’t, that was a big one!” Bonnie said just as her husband rushed out of their house still covered in soap. “I saw the street rippling.”

It wasn’t until I got home did I realize the magnitude of this earthquake. The broken water pipe was a little inconvenience for my family, the furniture could be picked up and broken things could be replaced. When the images of the damage started to flood the news stations, it is remarkable that more folks were not killed.

My husband and my father were both stuck in Oakland, not arriving home until after 11 having to travel through Marin to get home. I spent that night, sleepless of course, with Dennis and Elaine…praying with them as recovery efforts continued for days at the Cypress Structure. Forty-two lives were lost when the Cypress arm of 880 collapsed. It Was Apocalyptic.

Over the years, there have been many small quakes. Little fake ones in Daly City which were really sonic booms in March 1971, the day we moved into our new home. A few more there over the years. None in the Pacifica house since it was built on rock…how many piers did Papa say were driven into the rock, Katie? My mom, in 1989, thought a large truck had driven by. A few scary ones when we lived in Berkeley, thought I was safe when we moved to San Pablo only to find out we were sitting on the Hayward Fault…site of the next big one. Great!

So teach us to number our days,
That we may present to You a heart of wisdom.