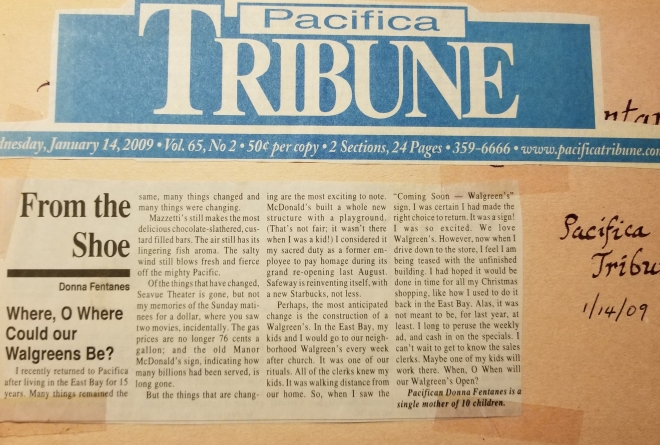 Celebrating the tenth anniversary of my first publication in the Pacifica Tribune!

I recently returned to Pacifica after living in the East Bay for fifteen years. Many things remained the same, many things changed and many things were changing.

Mazzetti’s still makes the most delicious chocolate-slathered, custard or whipped cream filled eclairs. The air still has its lingering fish aroma, and the salty wind still blows fresh and fierce off the mighty Pacific.

Of the things that have changed: Seavue Theater is long gone, but not my memories of the Sunday matinees for a dollar where you saw not one, but two movies. Best way to spend a Sunday afternoon. The gas prices are no longer 76 cents a gallon, and the old Manor McDonald’s sign, the one indicating how many billions were served, is gone too. The Five and Dime where you could get a bag of popcorn for ten cents – gone. Sadly, these places that hold many fond memories have gone the way of many things from the 70’s.

However, the things that are changing are the most exciting to note: Manor McDonald’s built a whole new structure with a playground. (That’s not fair; it wasn’t there when I was a kid!) I considered it my sacred duty as a former employee to pay homage during its grand opening last August (2008). Safeway is reinventing itself, with a new Starbucks, no less.

Perhaps the most anticipated change is the construction of the Walgreen’s where Seavue Theaters used to be. In the East Bay, my kids and I would go to our neighborhood Walgreen’s every week after church. It was one of our weekly routines. All the clerks knew my kids, and it was walking distance from our house. So cool. So, when I saw the “Coming Soon – Walgreen’s” sign, I was certain I made the right choice to return to Pacifica. It was a sign! We love Walgreen’s.

However, now when I drive down to Manor, I feel I am being teased with the unfinished building. I had hoped it would be completed in time to do all my Christmas shopping like I used to do in our East Bay Walgreen’s. Alas, it was not to be. I long to peruse the weekly ad, and cash in on the specials. I can’t wait to get to know the sales clerks. Maybe, even, one of my kids will work there. But for now: When, O When will our Walgreen’s open?