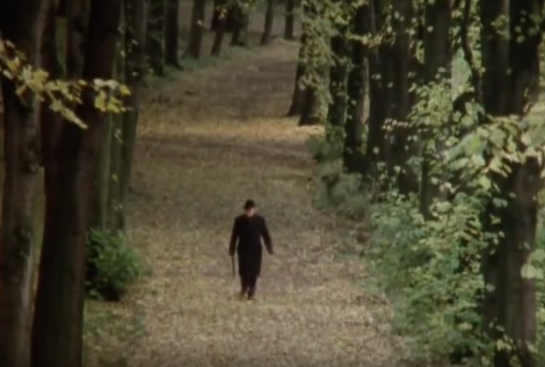 I was driving home one Sunday after trying to go to church. I was angry we hadn’t made it to the service because of the little war that erupted in the car. While driving, I noticed an old man walking on the road. The road was a busy four-lane street without sidewalks. He was walking in the direction I was driving, and I was coming up behind him. From the back, I noticed his ill-fitting suit and his brown derby securely on his head. He reminded me of my old, agile Portuguese neighbor whom I’d admire from my window as he repaired his roof.

I passed the old man and glanced at him in the rear view mirror, thinking maybe I would see that old Portuguese face. I knew I wouldn’t because that neighbor had already left this world. And this man was very much alive. He was defiantly smoking a cigarette while walking at a brisk pace. He wanted to cross the four-lane road, and I glanced in my mirror again to see if he was successful. I thought maybe I would stop to help. But, he was determined and sure-footed. He didn’t need my help, he would make it.

This old man, his clothing, his hat and his defiant manner reminded me of my carefree childhood when men like him were all over the place. The most discomfort I felt was the anticipation of doing chores, or the consequences of not doing homework. My most pressing concerns were whether that cute guy was going to be on the bus or if I had a ride to the dance on Friday. What a stark contrast to today! Driving home with a car full of children worrying about a bank account empty of funds, my concerns had dramatically changed. There are creases on my brow from the sheer weight of my responsibilities. Men, like that old man walking down the road, had the same creases. My father had the same creases.

My father told me of a time when the weight of his responsibilities were at their heaviest. Confronted by his boss to quit drinking or to quit, he purchased a six-pack to think it over. After that was gone, he got a ride to the Russian River where my mom and we kids were. In the cabin, he was lying on his bed contemplating the wife, the kids, the mortgage, the houses, all the cares; and these responsibilities pressed hard. He could hear the kids splashing and laughing as they swam, careless, without worry, while he was carrying the load, however imperfectly, on his fragile shoulders.

Fast forward forty years, my children were silent in the car because they knew I was mad. I looked nervously at the little gaslight that comes on when the tank is empty reminding me of the many empties in my life. Now the burden was on my even more fragile shoulders, and I felt like my father did. But that old man reminded me of the kind of folks who were around when I was a kid; they had their creases, their responsibilities, but somehow they made it. That six-pack was the last my father bought, and he made it, too. I looked back one final time and saw that the old man made it across. So I drove home that quiet Sunday afternoon, believing I would make it too, like my father and like the old man walking on the road.